Ever dreamed of having a micro garden? Then fairy gardens would be great for you.

Fairy gardens might be inspired by mythical, magical and tiny creatures, but you obviously don’t have to believe in fairytales to build one. All you need is creative imagination, small items that you can easily find in your house or the dollar store, patience and attention to details.

Fairy gardens are quite basically micro gardens, so you can easily build your own with little space and a creative mind. Check out these awesome DIY fairy garden ideas & tutorials. Create a perfect place to invite your tiny friends to lay their magic dust or just add a different touch to your gardening projects right now!

This actually isn’t a fairy garden at all, but rather a terracotta planter which was decorated with painted pebbles and straw to look like the front door of a little house. It looks really sweet and magical though. via consumercrafts 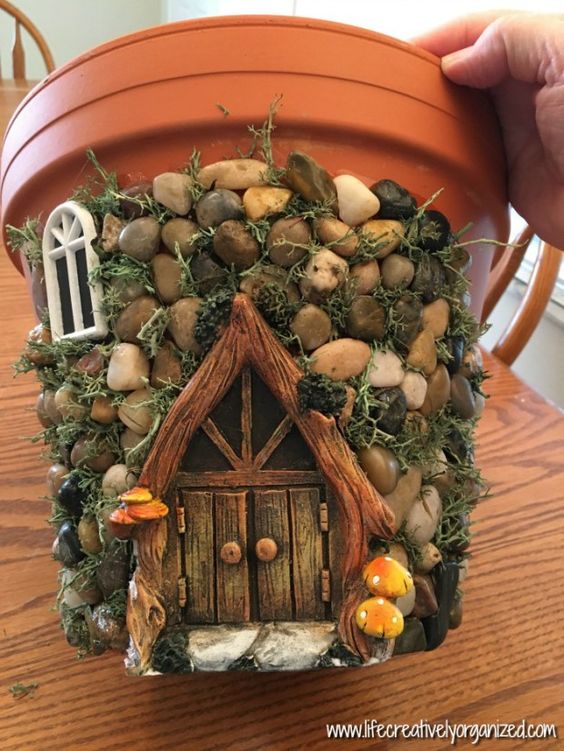 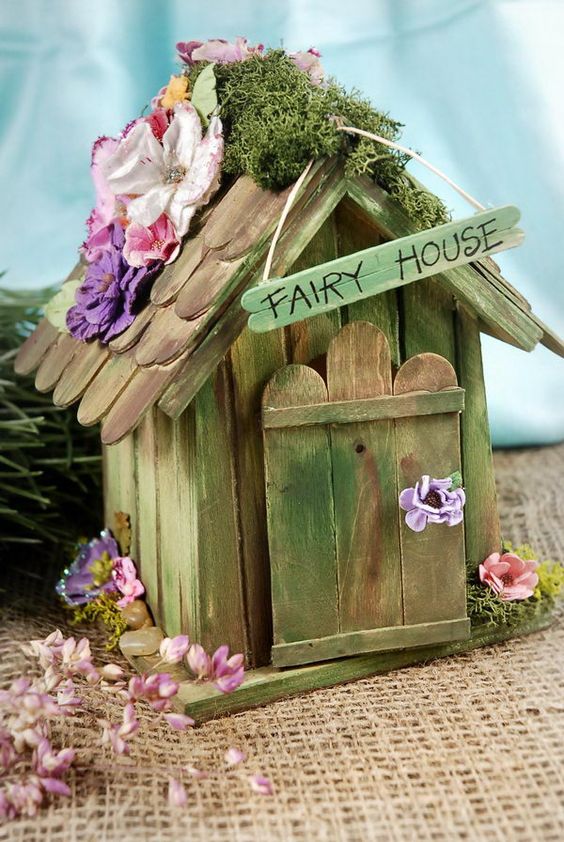 This fairy garden is really beautiful with its bright, colorful flowers. The rustic windmill in the middle is gorgeous and unique, as are the petals around the rim, which make the garden look like it was planted at the center of a flower.

This stacked flower pot fairy garden is very impressive, both because it manages to have a lot of the garden aspect – the top tier almost looks like a miniature tree – as well the decorative one. The ladder in the second tier is really cute, while the pipe-like structure off to the side is really unique. via bystephanielynn 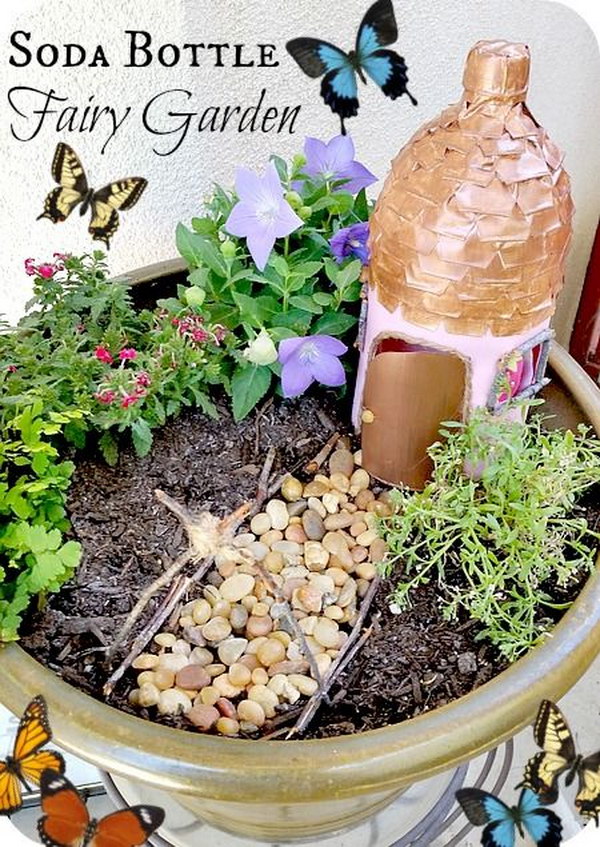 This foiled soda bottle house is a great idea to create the fairy garden with the beautiful flowers and the pebble base. via mypinterventures 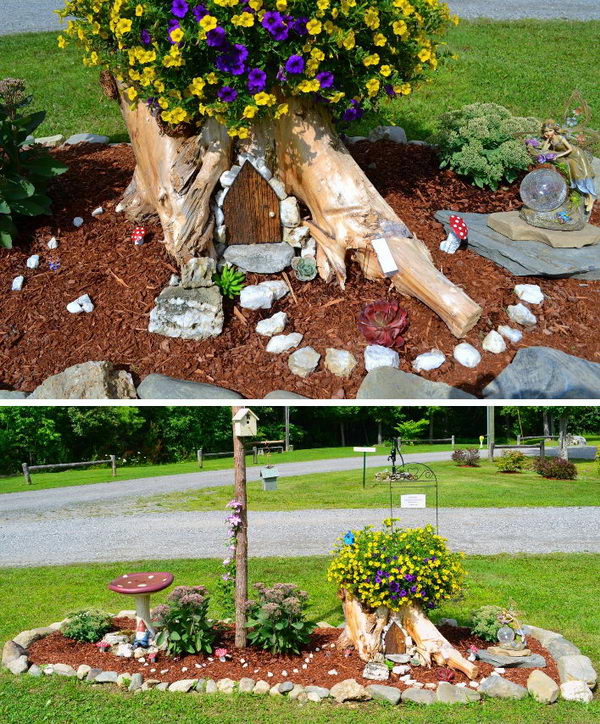 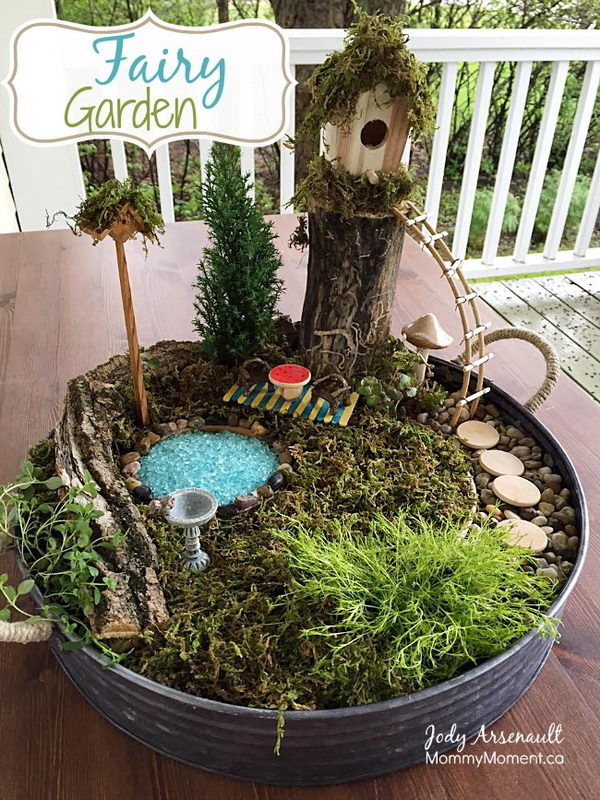 This is really cute because of how well it was blended in with the plants. The miniature palm and pine trees are really precious, as is the small sparkling pond. The tree house is a nice little touch as well. via mommymoment 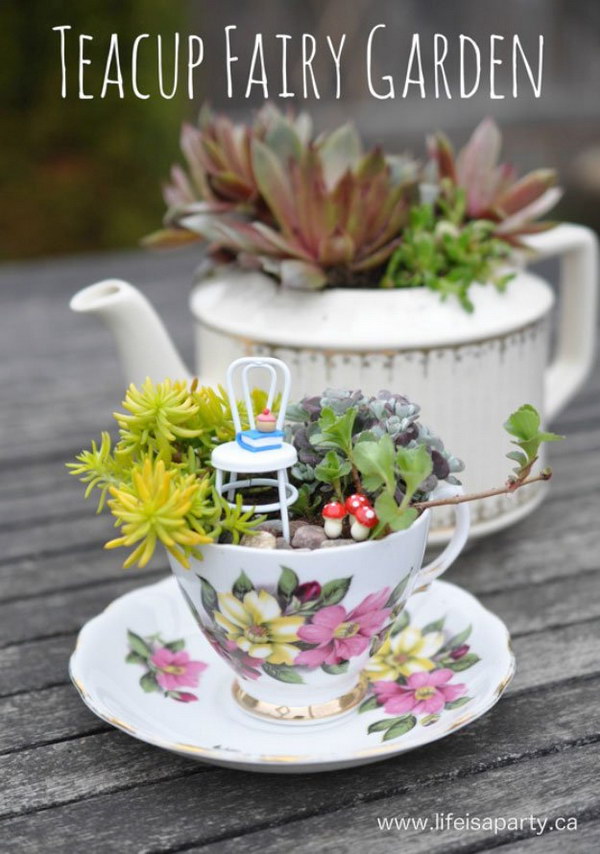 You can build a tiny world in a big teacup or in this case plant a really small garden. The China cup is a great setting with its watercolor painting and unique shape, and the little doll chair on top adds the ultimate whimsical touch. via lifeisaparty 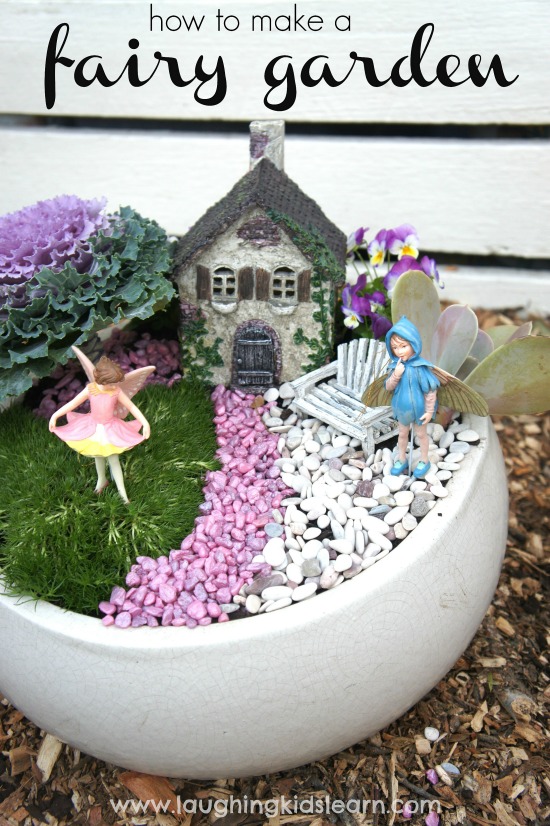 A solid, big white ceramic pot is the perfect setting for this miniature garden with its rustic little house, lounging chairs and pebbled patio area. The fairies clearly love it, as you can see. via laughingkidslearn 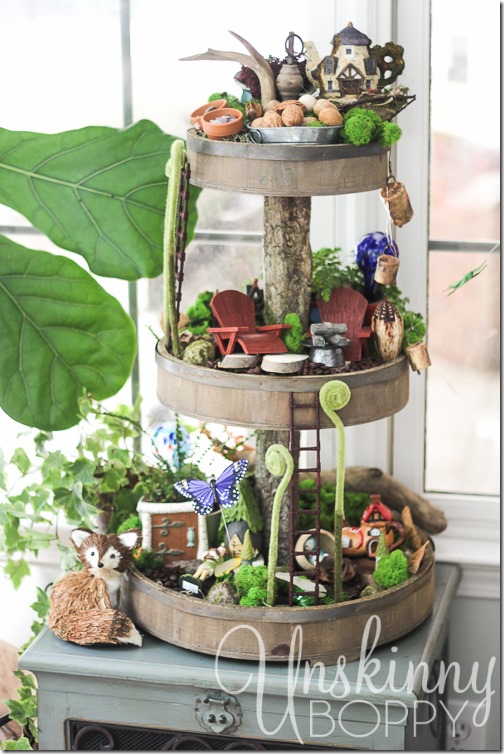 The colorful, pointy shaped and extremely detailed pinecone house is 100% reminiscent of fairy and gnome movies with its detailed, textured roof, rose embellished archway door and pastel colors. It is the perfect centerpiece for a fairy garden. via source 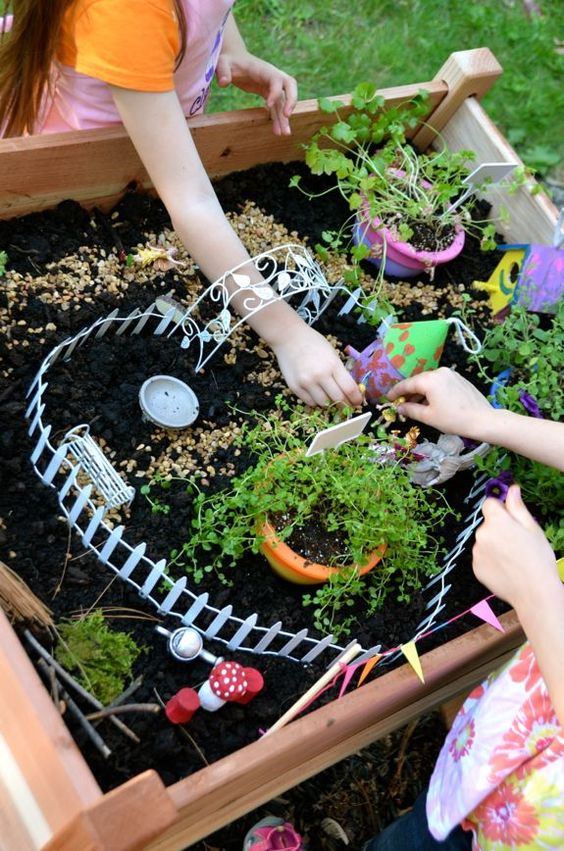 This open cream table is the perfect home for a small fairy garden village, complete with the quintessential white picket fence and little arch entryway with a welcome sign. via innerchildfun

Fairy Garden in a Lantern 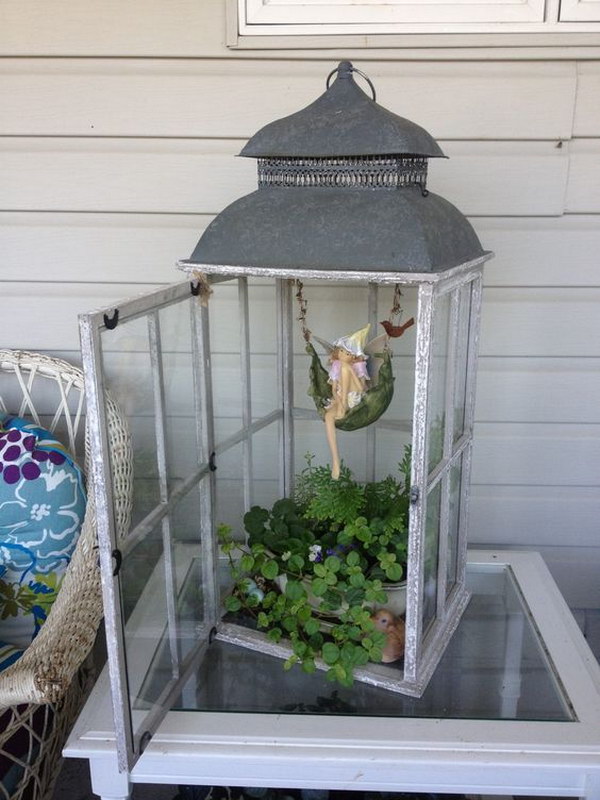 The lantern fairy garden is a really cute idea. The garden itself is quite simple, but the lantern setting is really unique, as is the little fairy suspended inside the lamp above the garden. via pinterest 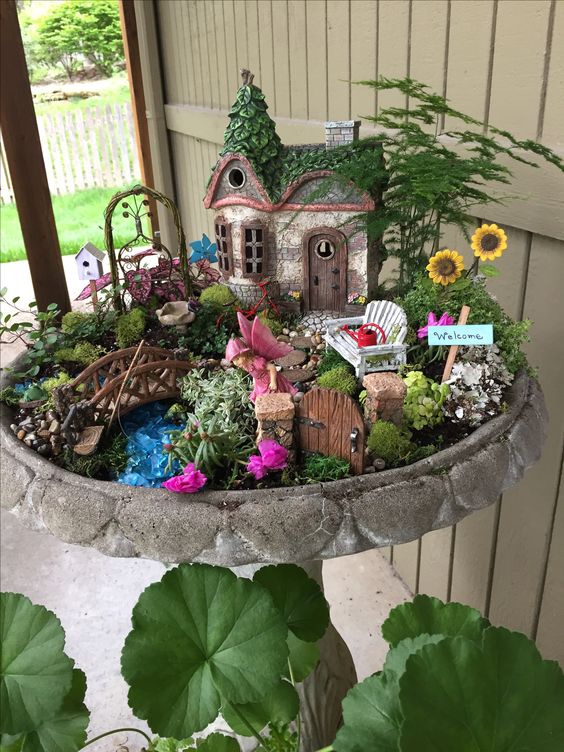 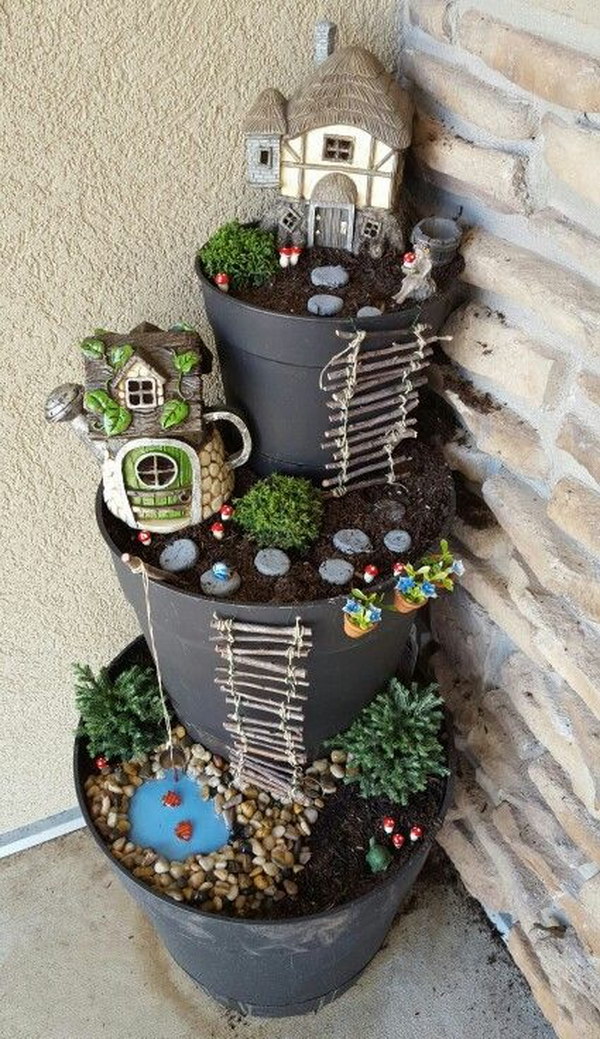 The stacked, potted garden is a great craft. In fact, the tower garden actually looks more like a fairy town with its little huts, ladders going up the side and even a little fake pond in the lower level. 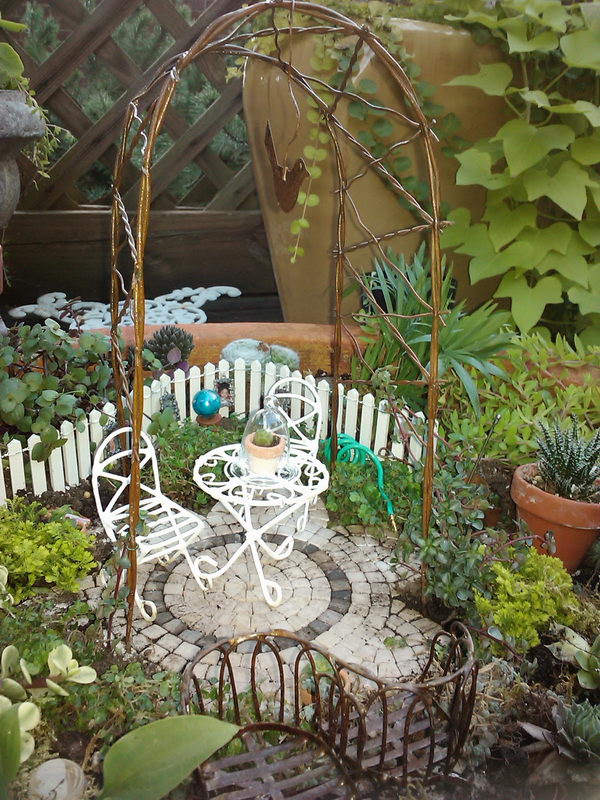 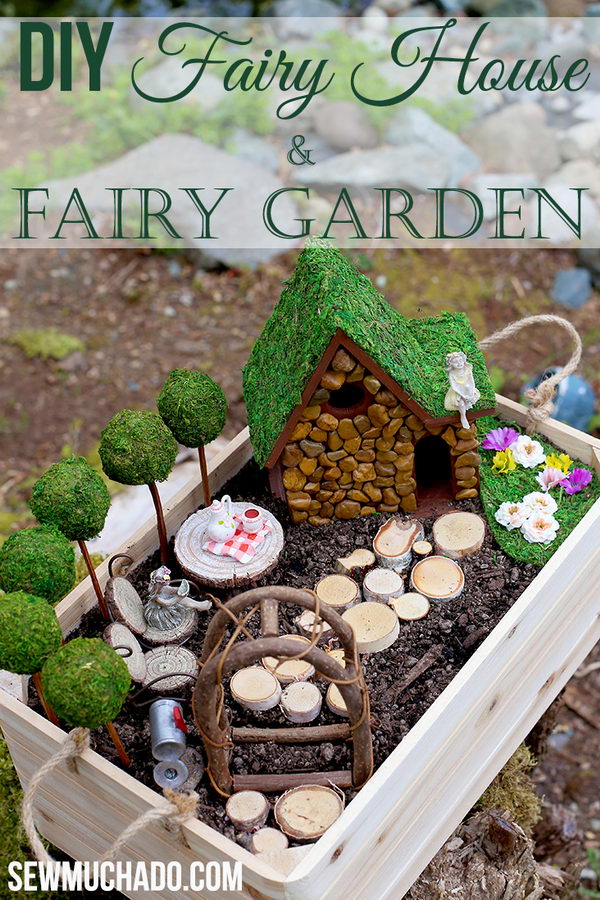 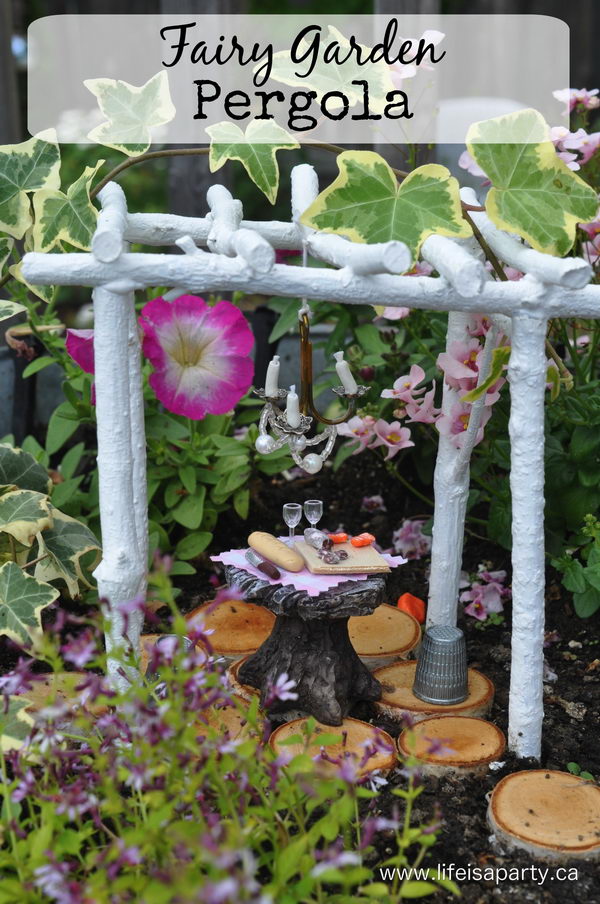 DIY Fairy Garden in a Birdbath 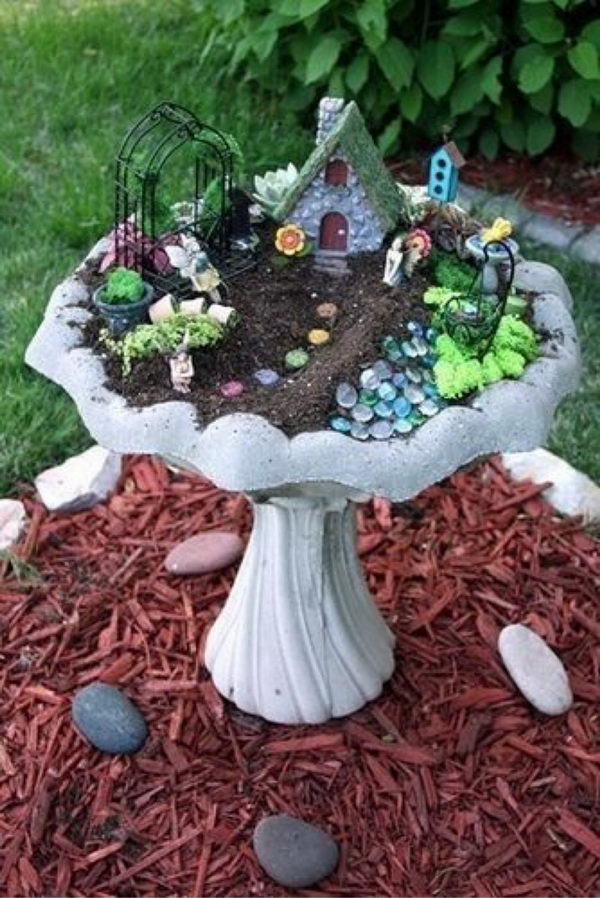 This birdbath makes for a beautiful fairy garden setting. As for the garden itself, the rustic house is clearly the main piece, but the little colorful pebble trail is also a really cute touch. via curlycraftymom 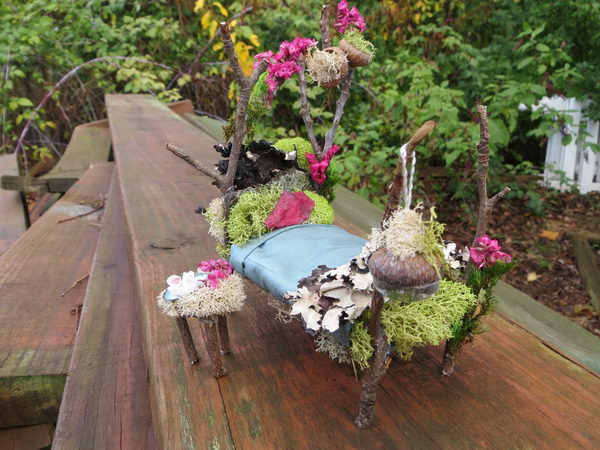 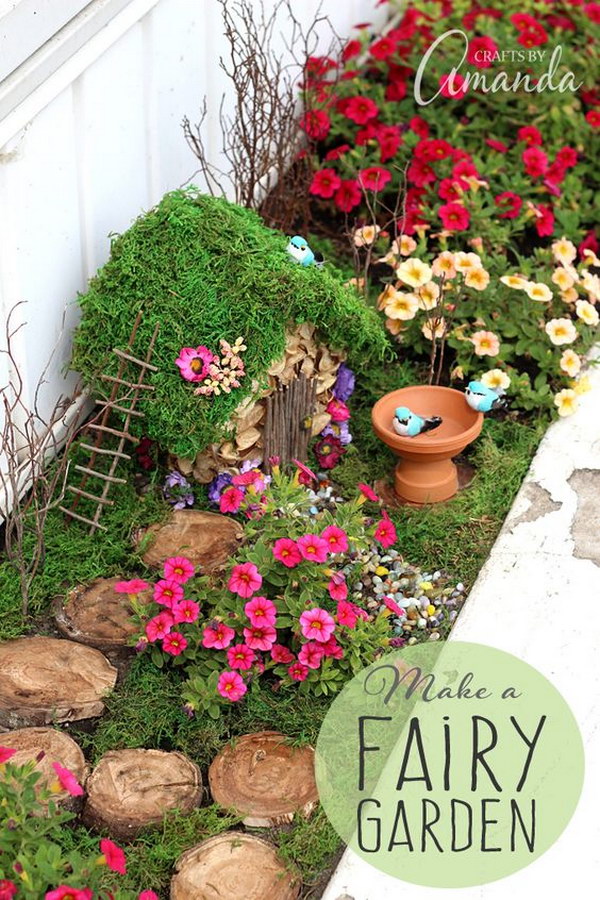 This DIY Fairy garden isn’t quite as miniature size as some others we’ve looked at. It could almost look like a colorful, yet regular garden. When you look at little details like the twig ladder off to the side, the magic really comes to life here. via craftsbyamanda 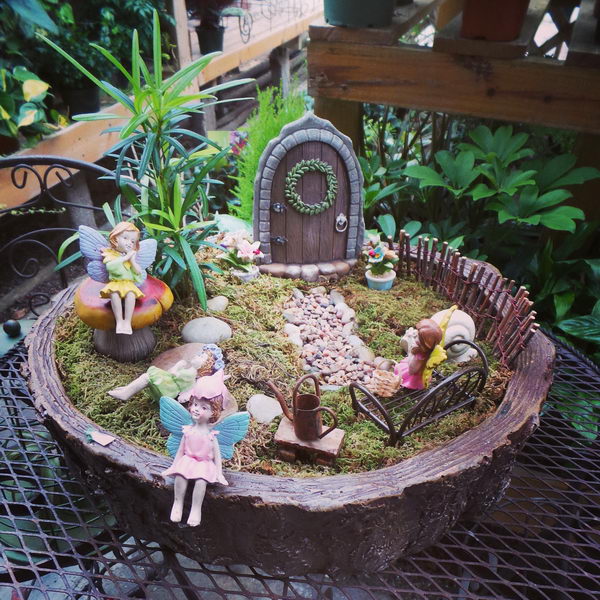 This little DIY project installed in a larger and shallower clay pot is more of a little garden than most others, but also has that whimsical, handmade charm because of the simple, brightly colored houses and improvised pond. via source

This is another great example of a beautiful, portable miniature garden. The wheel barrow is a great, spacious setting, and the rustic, small village is amazing with its tall house and white picket fence, among several other details. via source 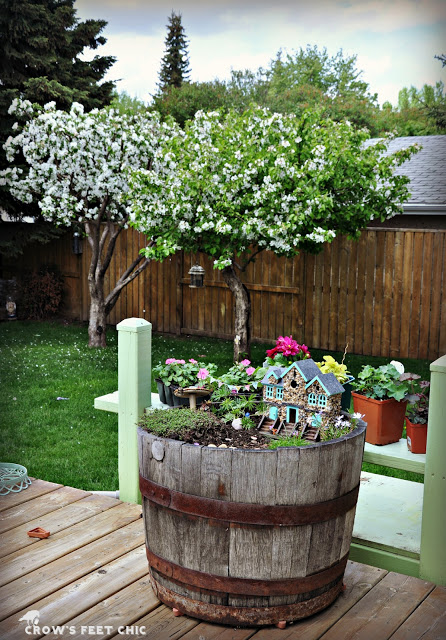 It doesn’t get any more whimsical than The Wizard of Oz, so it makes all good sense to create a miniature of the Emerald City as your fairy garden, if you’re a fan. The little creation full of detail was made using green glassware and beautiful, multicolored pebble road. 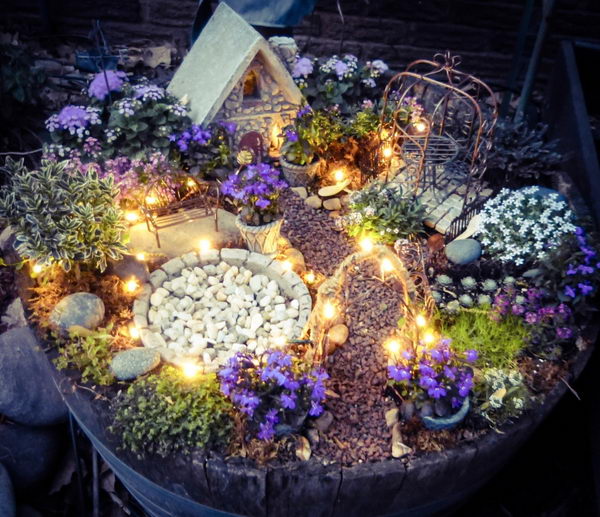 This little window display is a really cute and practical way to set up a fairy garden. The garden itself is really beautiful and colorful but the coolest touch is the little cone roof installed right on top. via unskinnyboppy

DIY Fairy Garden with Blue Glass Stones for a River 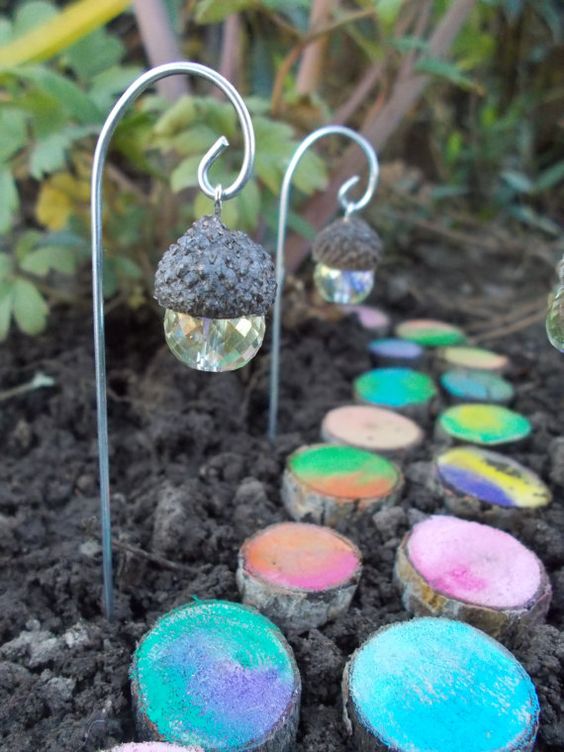 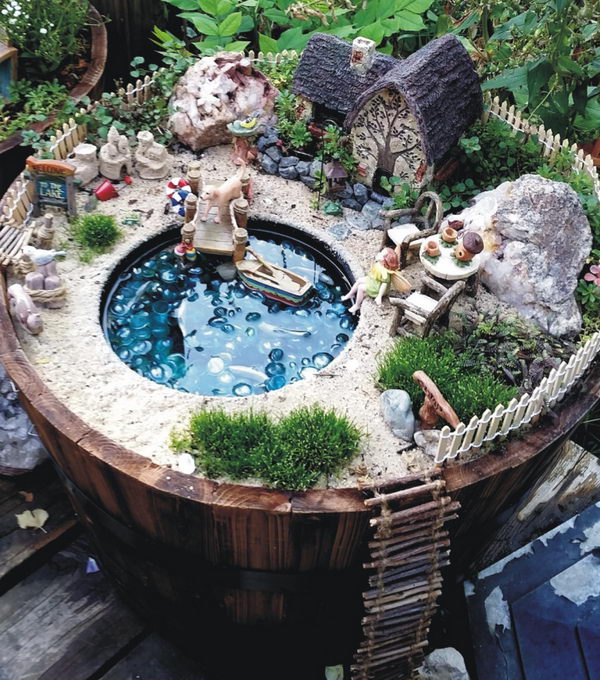 DIY Fairy Garden in a Bucket 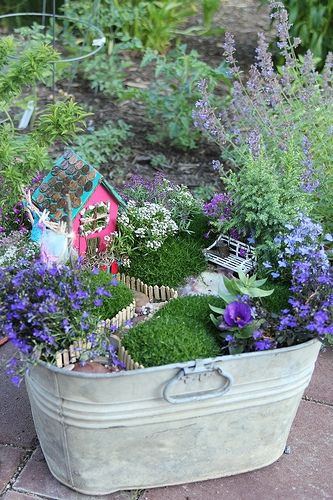 A bucket might not seem like a very magical location for a fairy garden, but this one proves that it is what’s inside that matters. The lilac blooms are truly beautiful and the little red house is absolutely precious. via theburghbaby 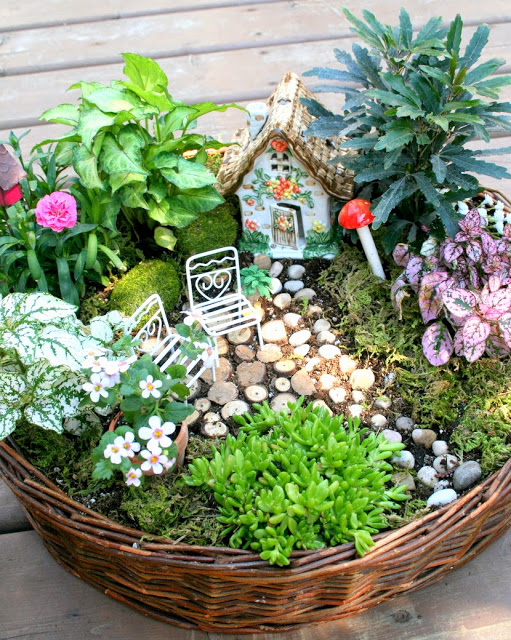 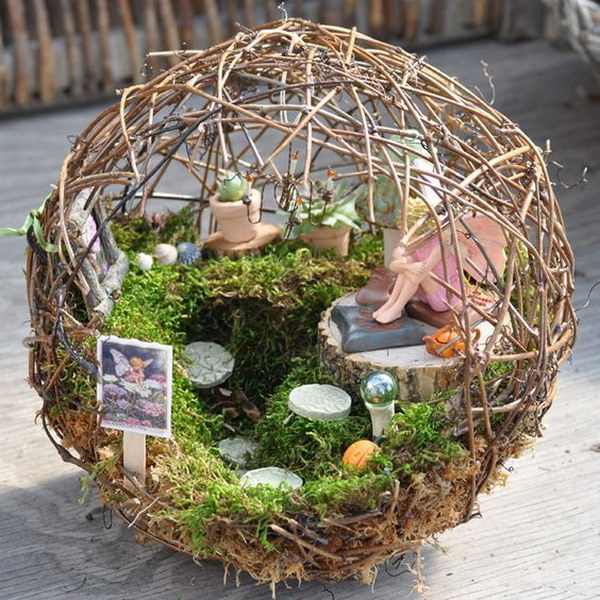 This little fairy garden almost looks like a scene from a snow globe, when set up inside the grapevine sphere as it is. The sphere itself is really beautiful and delicate, and it blends in quite nicely with the garden’s base. The decorations inside are quite neutral, but they stand out beautifully. via miniature-gardening